What are the largest & most lucrative online multilingual markets aside from English? 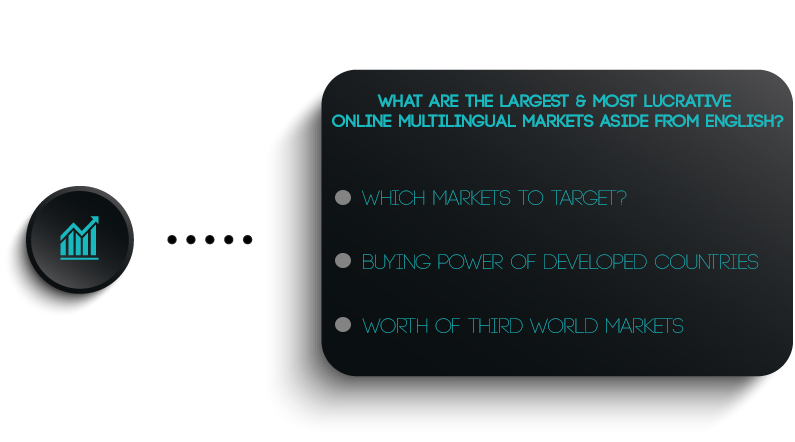 With Google reporting that over 75% of their traffic comes from multilingual searches, it has become crucial to consider developing a multilingual online presence. However, the question remains the same: Which markets to target? Which ones are the most important in terms of users, etc.?First of all, let’s see which parts of the world feature the most users. Contrary to general belief, it is not North America! With more than 1 billion users, Asia definitely takes the lead, followed by Europe with approximately 600 million users, in comparison to 350 million in North America (North America being defined as the U.S., Canada, and Mexico).In my extensive experience with multilingual online applications, I have learned over the years to differentiate clearly the amount of users versus the market potentiality of a product or a service. For example, the Hispanic online market (between South and Central America, the U.S., the Caribbean and Spain) features slightly more users than the French-speaking market. But when it comes to buying power, countries like France, Belgium, Switzerland and Canada (Quebec) have so much more buying power than Peru, Bolivia or Chile!More than just buying power, we need to look at the cultural ramifications involved in internet behaviors. In other terms, is a specific market used to ordering & transacting online? For instance, compared to its amount of users, France is extremely active online, while French-speaking countries in Africa are proportionally inactive. The same applies when comparing Spain and some South American countries. If you were to compare the online buying habits between 100,000 users in Spain and the same number of users throughout South America, you would notice that people out of Spain order products and services at least 5 times more than their South American peers.In many cases, it is not a matter of buying power, but rather mail order habits based on the country’s postal delivery system. In fact, in many countries where the postal system is unreliable (not to say flaky!), online users were not “groomed” with mail order habits prior to the internet. As a result, although such markets will look for products and services online, they certainly are not as mail order oriented as other countries featuring more efficient mailing systems.Therefore, it is impossible to rely solely on the amount of users when considering establishing a multilingual presence online. Another good example to illustrate such fact would be China and Japan. China currently has almost 642 million users and it is one of the fastest growing markets on the internet. Japan, with 109 million users, has nearly reached its maximum potential with almost 86% of its population online.Once again, no one should confuse the amount of users versus the buying power of a given market.On the other hand, one needs to consider the worth of Third World markets/less economically developed countries. For instance, countries like Bangladesh, Mozambique, Somalia, etc., might not seem very attractive at first. However, in Third World markets, those online are affluent and wealthy. In those countries, there is no middle class. Basically, you are either dirt poor or filthy rich!. Many online gambling portals and entertainment websites of all kinds have found high spenders in economically-disadvantaged-markets. In fact, wealthy individuals in Rwanda or Chad do not have many entertainment outlets in their homeland! Furthermore, most everything is lacking within their country infrastructure: clothing, electronics, etc. Online applications have therefore become a form of “entertainment salvation” for the wealthy minorities of third world markets.Online multilingual markets are complex, and instead of looking at languages/countries just by their buying power or number of users, one should evaluate what they have to offer and define the marketability of their products and services accordingly.Are you looking for end users to buy your products? Then look at the buying power of the targeted markets along with the reliability of their postal and transportation services. Are you a manufacturer looking to find more distributors/to increase your exports? Then chances are that the world is your oyster.I advise you to perform a meticulous evaluation of your market potential when developing a presence on multilingual search engines. So many factors need to be taken into consideration…Do not look at Japanese, French or Spanish just as country specific, but rather online language market shares! Just as an example, aside from all countries where Spanish is spoken, one of the most active Hispanic online markets is in the U.S.!