Let us promote your website on all major Czech Search Engines! 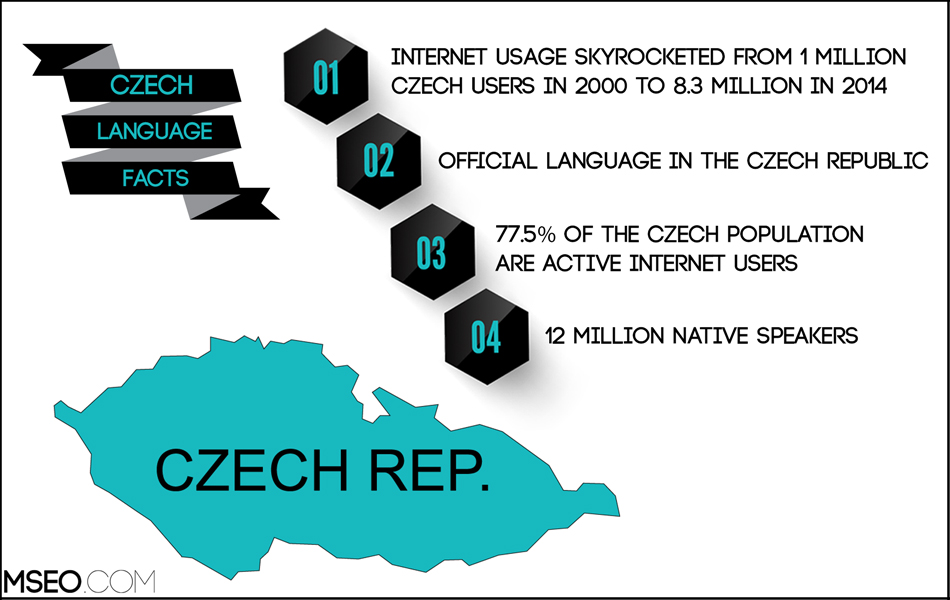 In order to be featured on Czech search engines, it is necessary that your website is localized in Czech, either partially or entirely. Czech website localization refers to the process of translating your current website into Czech, conducting Czech keyword analyses, implementing Czech SEO, and integrating the localized Czech pages onto your website so that you can have eligibility to rank on Czech search engines.

Contract our Czech experts to create an entry page, multiple pages, or a full-website translation in Czech for your website optimized with your Czech keywords/meta tags. As a multilingual SEO company, our primary focus is to deliver culturally and semantically accurate translations while aiming to maximize organic-rankings of targeted foreign-keywords.

Czech is the official language of the Czech republic and is one of the West Slavic languages, along with Slovak, Polish, Pomeranian (Kashubian), and Lusatian Sorbian. It is spoken by most people in the Czech Republic and by Czechs all over the world (about 12 million native speakers in total). Czech is very close to Slovak and, to a lesser degree, to Polish.

The Czech Republic is one of the most stable and prosperous of the post-Communist states of Central and Eastern Europe. Growth in 2000-05 was supported by exports to the EU, primarily to Germany, and a strong recovery of foreign and domestic investment. Tourism industry is huge and employs about 1% of the active population.Internet usage skyrocketed in recent years going from 1 million users in 2000 to 8.3 million in 2014. This translates to approximately 77.5 % of the Czech population using the internet on a regular basis.

Get a quote to localize your website into Czech today!